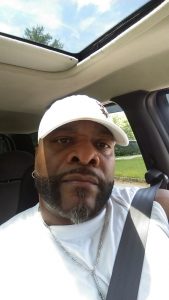 I was born in Chicago Illinois on November 28, 1966, at approximately 12:13p.m.  For 22 years I navigated the violent streets of the inner city.  Luckily, I found football to occupy my time and keep me out of trouble.

I enjoyed football and became proficient at it.  So much so,  that I received a scholarship to Northeastern Illinois University where I started as a freshman.  Unfortunately, the football program was discontinued and my scholarship was null en void.

Enter the U.S. Military.   Army Alpha Battery 5/1 Field Artillery, Ft Polk Louisiana: “THE KING of BATTLE”.  After serving my country, I noticed that my knees and back were hurting with more and more frequency.  I went to the V.A. (Veterans Administration) to get medical attention for my condition.  14 years went by and I had every pill, shot, voodoo that they could muster.

Not only that, I was angry all the time … I mean all the time!  I was  short-tempered, impatient and easily triggered.  After going back to the V.A.’s in Chicago, Milwaukee, Kansas, and  Georgia with no clear answer as to why I felt this way, why I hated the sight of people, why large groups simply terrified me, I finally came here to Knoxville TN.

Here I was diagnosed with PTSD (Post Traumatic Stress Disorder), where I received double knee replacements, and am receiving PTSD counseling.   I have been here since May 9th, 2013 and here is where my calling became clear.